Know Your Problem, Find Your Best Solution (Ask Ben how)

The biggest mistakes clients make when selecting a vendor…

We sat down with Benjamin Cornforth, VP of Worldwide Sales at Infrrd, to find out more about the buyer journey and mistakes clients make. As an industry veteran, he had lots of tips to share.

“A lot of people think they’ve got a technology problem, when really what they have is a problem that bridges both technology and process,” he explains. They run out and buy a piece of technology hoping it’ll resolve their issue before taking the time to understand what they’re really trying to accomplish.

“Make sure you don’t get a solution that’s going to do the same thing that you’re already doing – you’ll be underwhelmed by the results,” he says. “It’s not a technology issue or a process issue, it’s a joint issue. As a software vendor, I know that moves my deal back nine months, and I’m OK with that. You need a tool to encapsulate and codify your to-be process, you have to know what the tool is going to do.” 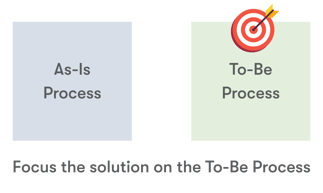 Here’s How We Got Here: The Quality and Cost Conundrum

Enterprises moved from their onshore operations to offshore operations in the advent of business processing outsourcing. Providers made it easier to move processes to low-cost areas, then discovered they weren’t getting the same results. “The reality is that the further the process moves away from the center of gravity, the more stress there will be in the process,” he says.

That’s because the people who knew how to do the thing aren’t right there, they’ve been let go, and the process may have not been well-documented enough to be understood by people thousands of miles away who aren’t necessarily as tied to the work or knowledgeable of its mission.

“So, what you got out of this was a lower cost of delivery, but you had a set of qualitative things that would fall apart. You would see due dates missed and key metrics missed, you would see lower productivity numbers because these folks weren’t the practiced hands you had back in your headquarters, who were more familiar with your business.”

Around 2015, the tide started to reverse, and business started coming back onshore. But the damage had been done. The labor arbitrage had taken place. There was no way to put the quality back in without upping the costs, but paying low labor rates for less-than-optimum outputs also wasn’t ideal, he says. That’s not to mention the latest complications and market disruptions stemming from Covid-19, which led to more staff layoffs as companies struggled to stay afloat.

Here’s What Enterprises Need to Do: Process + Technology + People

Companies have to do the same work with fewer people, faster and better, or they’re going to grow and not be able to grow proportionally. “Costs have to grow at a slope much lower than revenue,” Ben explains. “The only way to get the quality you want and the output you need is through automation. That’s the only thing that’s cheaper, that can possibly give you a better outcome.” 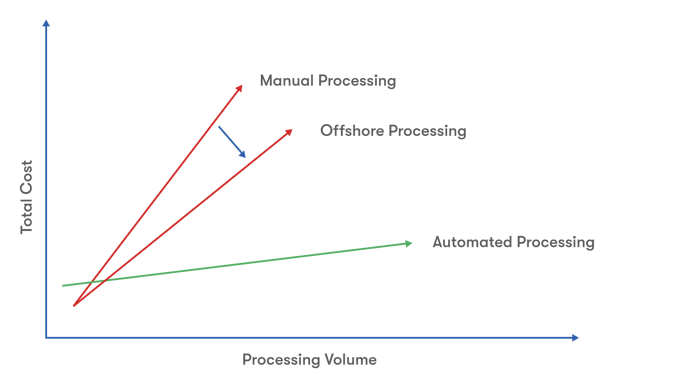 Understanding that the process side and technology side together form a dyad is important, he says. “You can’t solve the process and not encapsulate it in a piece of technology, or it won’t persist.”

And Here’s How: Get Machines Involved

For the first time, technology has come far enough to start to solve more sophisticated business problems, starting with back-office accounting processes. The procure-to-pay process is just one example, as it requires the ability to pull data out of different documents and make sure they match before a check goes out. “Today, a human references those manually, types them into SAP or Oracle, and spits out an approval. So that’s what we’re trying to solve for.”