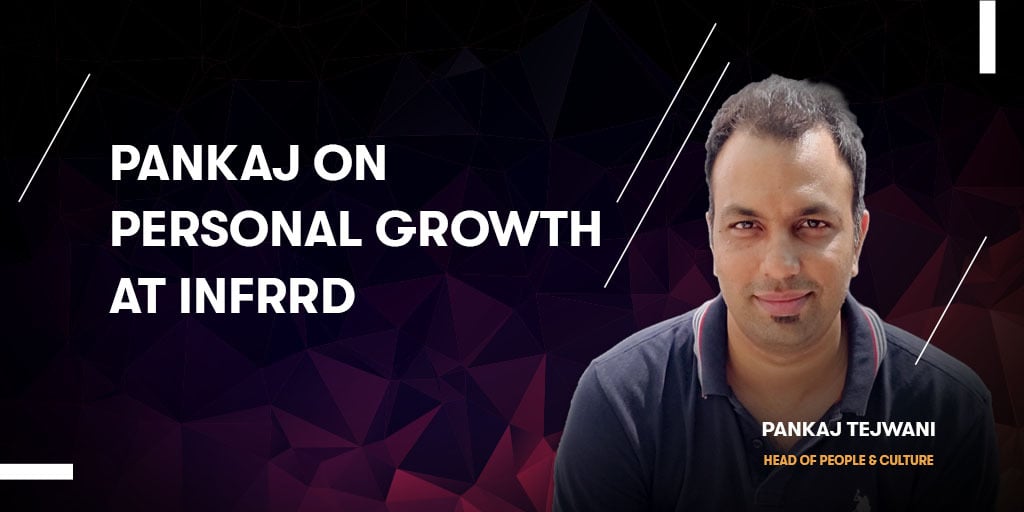 Pankaj On Personal Growth at Infrrd

A Place To Learn And Grow: How Infrrd Became Part of Pankaj’s Career Path

When Pankaj Tejwani started job searching on LinkedIn, Infrrd came up as his first result. “You generally explore a lot of things -- for me, it was just here, and it worked,” he says. He made the jump from a training company to a technology-focused Infrrd, and since March 2019, has served as the company’s Head of Learning and Development.

He was excited about the job, he says, because he wanted to be at an innovative technology company where he could implement training and try to help people learn in the ways they grow best. Also, he says he was impressed off the bat by Infrrd’s product and the company’s work with AI, which Pankaj points out is the “next big thing taking the world by storm.”

Having come from a training background, he says he’s learned a lot about focusing more on the organizational side of a company and how to help the company grow via individuals’ personal development. “I’m excited about talking with people to understand where the training need lies, and how I’m going to bridge that gap.”

He spends his days' building relationships and collaborating with department heads to implement management’s plans -- every day is different and challenging. “My day is like a puzzle -- I don’t know how it’s going to end, but it’s going to be very interactive, informative, and useful,” he explains. “You’re looking at a bigger puzzle and you’ve solved a bigger problem.”

Pankaj’s work includes a focus on organizational design and building more effective feedback into the system. When employees get their feedback in meaningful ways, they can put it into action. “At the end of the day, as an organization, we are trying to see ‘how do we improve from here.”

A Culture Of Transparency And Innovation

Experimentation and a willingness to make mistakes are two key elements of Infrrd’s culture, Pankaj says. They lead to learning and give people permission to take on tougher challenges. Transparency is also important, he says, so that people know how they can improve and how they and their work are being perceived. “I’m trying to bring in a culture where two people can sit and talk and have a meaningful conversation, where we are happy to give feedback, happy to receive it, happy to discuss it, open to learning, and open to growing.”

That kind of open communication can also bring out innovation from across the ranks, he says, explaining how a developer with just a few years of experience was able to raise an idea that led to the company filing a patent for it. “If it was any other organization, it would have been discouraged at a managerial level or encouraged and stopped,” he says. “It’s the ability to make independent decisions.”

Being able to connect with anyone in the organization and have their ideas heard has attracted high-quality, motivated developers from the start, he says. They are compelled by the chance not only to share ideas but also to ask for more information, further explanations, and receive mentorship.

Building a solid connection among team members at all levels leads to collaboration on complex, technology-rich projects that developers can take ownership of, which in turn fuels their career growth, Pankaj says. “As an organization, your career growth is also our responsibility.”