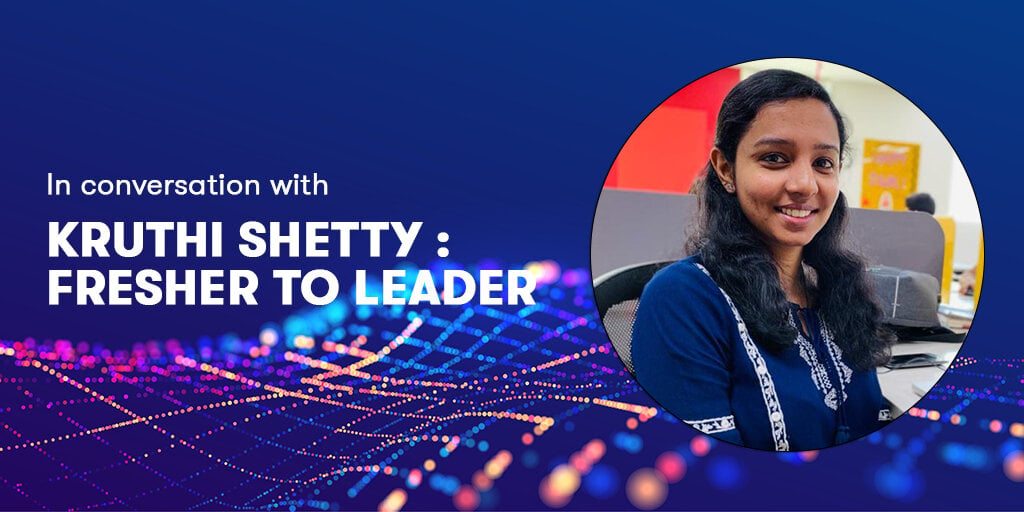 This week, we welcomed our new colleagues who are fresh out of college. We got on a zoom interview with someone who has been in those shoes, Kruthi Shetty, a senior technical specialist who has a story and more to tell about her journey from being a fresher to being a leader at Infrrd.

Kruthi who is an enthusiastic Java developer is a key engineer in Infrrd’s product engineering team. She has been with us since the inception of Infrrd. Having spent her entire career here, Kruthi has some great insights about growth at Infrrd. So, let’s begin.

Hey Kruthi, Let’s start at the very beginning. How were you recruited to work at Infrrd?

I completed my BE in Computer Engineering in 2013 from BNMIT, Bangalore. Aspiring minds, a job search portal was conducting a recruitment drive for female engineers and Infrrd was one of the many recruiters there. That’s where I was recruited as a Software engineer.

How were your initial days as a fresher at Infrrd?

The initial one month was path-breaking. It was our training period and at Infrrd, there are really passionate trainers. Nishit, who was my trainer then, is still a role model for me as an engineer and is a great mentor.

Right as the training ended, I got an opportunity to work on a product from scratch. Those were the initial days of Infrrd starting to move into the product space. I worked under the guidance and leadership of amazing engineers Pratyusha Rasamsetty and Pallav Tandon, the then VP of Products. Those were the greatest learning experiences of my life.

Since we were a growing team, that meant I got to wear many hats and experimented a lot. I had to figure some things out on my own and when I needed help or a way out, Pratyusha would step in. Collaborating and being mentored by her, the first two years were crucial in translating my theoretical skills learned at school into industry-ready tech. It was exhilarating!

How was it to work as a part of a team as a fresher?

At Infrrd, I have always been a part of dynamic teams. Team members I worked with were and are very smart and teams here discuss ideas and push each other to be better. In my initial days, these teams and the leaders I worked with inspired me to learn more and contribute better.

Years later when I became a team lead, the mentorship from peers and leaders continued. I still keep learning new things and how to manage my team in an efficient way.

As a fresher, how one takes feedback might make or break their career. What do you have to say about that from your experience?

Feedback is a way of understanding where we can do better and how we can get better. When I give feedback to my team members, I try to be as clear and honest as possible. Feedback must also come with reasoning. Let me give you an example.

One of my team members, who was a brilliant engineer and had worked in the team for 3 years, was presented with an opportunity to lead a team. Having worked with me, he wanted my feedback and we had an honest discussion about what responsibilities he would be taking up.

Although he was an amazing engineer who was a great team player, managing a team is a job by itself. The responsibilities were different. He understood which areas he would need to focus on and problems he needed to address to be successful as a lead.

Honest feedback always results in a better workplace and that is something everyone believes at Infrrd including the leadership team and especially Amit himself.

Last question, what would you like to say to the freshers joining us to get them excited?

Having worked on the initial versions of our product, today when I look at Titan, I see an abundance of opportunities. This product is capable of revolutionizing the industry and the greatest and most exciting thing about that for an engineer is getting to build that.

People who are joining us have the stage set to create groundbreaking features. Unlike large companies where the market controls the product, we at Infrrd are at the right time where we get to build something we’ll be proud of.

This is an opportunity to build something that’s never been done before and see it changing the world.

That was our interview with Kruthi Shetty, with over 7 years at Infrrd, as an inspiring mentor and great role model. From her days as a fresher, Kruthi has seen exponential growth in her career and in her technical expertise as an engineer. She is also an exemplification for young engineers at Infrrd.