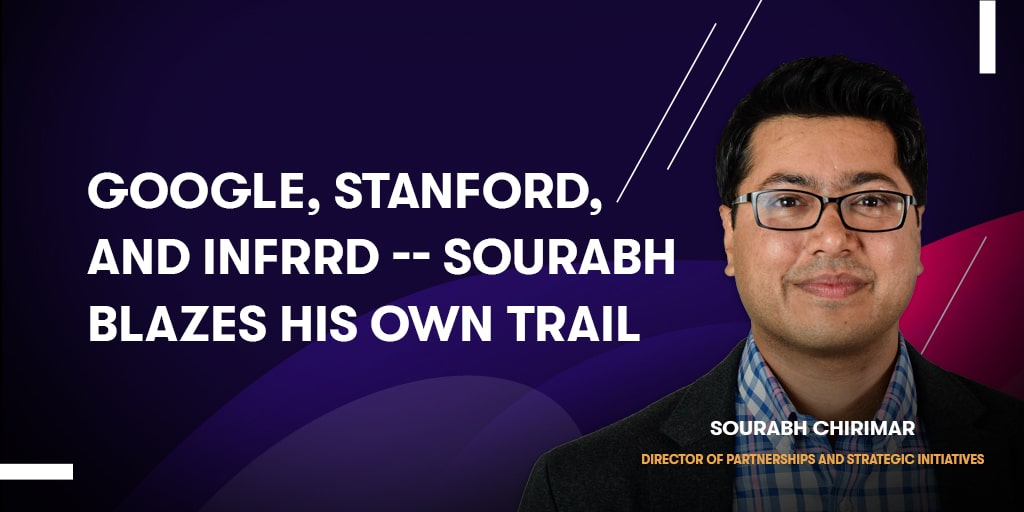 Google, Stanford, and Infrrd - Sourabh Blazes His Own Trail

Sourabh Chirimar has been a corporate banker, co-founded an edtech company and started an investment fund. He spent seven years at Google and took part in a fellowship at Stanford, before joining Infrrd May 1.

Even in a tight economy, Sourabh had options when it came to his next move. But he chose Infrrd because of the people and the culture. “It was an amazing group of people,” he explains. “Very simple, no arrogance -- very direct, and they’re thinking about growing a company.” It’s rare to find this combination of a respectful workplace, good culture, and high growth rate, he adds.

That translates into people who are willing to listen and open to feedback, he says, as well as a lack of red tape when it comes to speedy execution. “If you’re able to make people appreciate why something’s important, they move fast,” he says. “They don’t wait for the company to tell them something.”

An Exciting Path Ahead

Infrrd’s market position also made it attractive, he says, adding that the next few years will define its trajectory. “You join a company where the rubber is hitting the road, so that’s exciting,” he says, adding that he’s grown businesses from scratch to large scale before, and likes being part of a company with a clear road ahead.

His core role at Infrrd is to build world-class partnerships and ecosystems that deliver high value to customers. “The idea is to set up different channels and different types of partnerships, with the customer, needs as kind of a path forward, and then we can bring in the talent to scale it,” Sourabh says.

Sourabh is focused on technology partnerships, working with go-to-market partners, and adding value with automated solutions. Infrrd enhances these partnerships because of its unique ability to solve complex data extraction problems.

“Most of the partners I speak to have been in the space for a very long time, and they’re looking at problems they haven’t been able to solve, which are unstructured or semi-structured data,” Sourabh says. “The existing AI models are not good enough. We are scratching an itch that has been around a very long time, and they haven’t found a solution.”

Sourabh has held roles that sounded similar -- such as heading partnerships at Google -- but working at Infrrd means getting to blaze his own trail, and in a startup environment. It’s a rare opportunity to pave the path as he walks it, Sourabh explains, adding that he enjoys being able to influence the product, even beyond the partnerships themselves.

“It’s both exciting and daunting,” he says. “It’s exciting because you mold it, you figure out how you want it to be. But it’s daunting because there are so many avenues to explore at once.”

That freedom opens up lots of possibilities, he adds. “Nobody really gives you a slate and says ‘these are the ten things we want you to do,’” explains Sourabh. “It’s more like, ‘hey, you’re here, and we want good partners -- you build it out and let us know what the process is looking like.’ That’s challenging, that makes the work very meaningful.”

In his free time, Sourabh likes to read and write science fiction. His favorite writers include Isaac Asimov, Frederik Pohl, and Philip Dick.